First of all, a definition: A via ferrata is a climbing route in rock wall, materialized by metal steps sealed in the rock; a steel cable runs along it, a real lifeline to which the hiker is connected throughout his hike. This sporting practice offers, without requiring a technique or particular skills, to the beginners in climbing and to the thrill fans, the exploration of the vertical world, usually only for confirmed climbers. However, one must not be sensitive to dizziness and have a good physical condition

La Grand Fistoire: north-east of Sisteron, in the Alpes de Haute-Provence, a valley gives access to the lake of Serre-Ponçon by the Sarraut pass. Covered with orchards, it is dominated by rocky escarpments whose beauty characterizes the name of the village of Caire, "Lou Caïre", in Provençal the rock. In this limestone wall, footbridge, cant, gangways, Nepalese bridge and zip lines follow each other and offer an extraordinary hike. 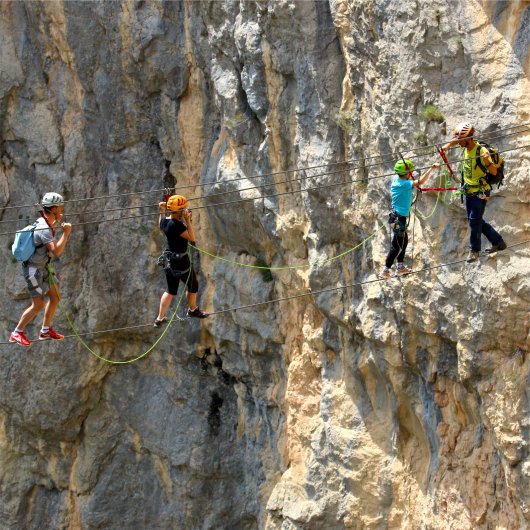 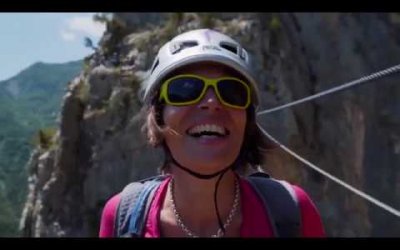 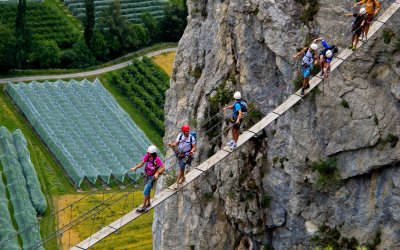 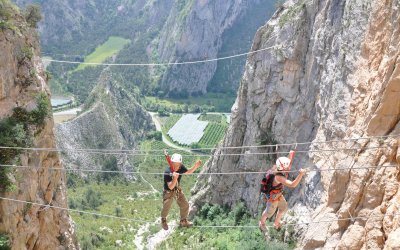 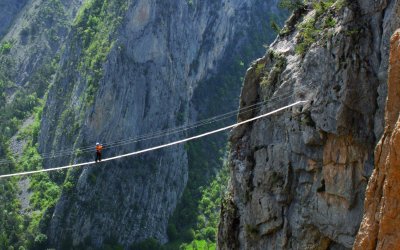 Difficulty level: aerial character, difficult to very difficult.
Access: 10-15 min by trail
Topo : several options are possible (with or without ziplines):
* Short route: direct access to the footbridge and exit avoiding the Bombu descent and the summit of the Great Fistoire. Time: approximately 1h30 to 2h.
* Intermediate route: full route from the south face of the Grande Fistoire: exit at the top then descent to the bridge and escape route to avoid the last section (Nepali bridge). Time: around 3h.
* Complete itinerary: like the previous one but instead of going out after the bridge, take a beam, followed by a Nepalese bridge (32 m long) and the rise of the Great Wall. Please note: this section is very physical (it is necessary to organize a quickdraw which will be used if necessary for resting). Time: between 3h30 and 4h.
Return way: the 3 ziplines or a descent path. Time: 30 minutes hike

The via is labeled "Qualité Tourisme™", the only state mark attributed to tourism professionals for the quality of their welcome and their services.

Technical characteristics :
Access : 15 min
Parking lot : altitude 800m
Departure : 860 m
Summit : altitude 1110 m
Duration of the ascent: 2 to 4 h
Level difference: 250 m
Orientation: South- South East
Soil: Limestone
Length of the via ferrata: 930 m
Period of accessibility : All year round
Higlights :
* the Bombu passage: 4 to 5 m overhang
* the 60 m footbridge
* the 32 m Nepalese bridge (Please note: it moves a lot!)
* the beam and the exit of the Great Wall (50 m vertical wall)
* the three zip lines: 150, 130, 220 m
Creation and development of the Grand Fistoire :
The via ferrata of the Grande Fistoire was not made in a day:
* In 1996, under the impetus of a local climber, the Municipality of Caire and the Tourist Office of the Highlands of Provence (Les Hautes Terres de Provence®), the Via Ferrata of the Great Fistory started. It was then the twentieth route in France. Today, there are nearly 200 routes.
* In 1999, the Fistoires gateway was installed. It was inaugurated during the Bike Festival by Eric Barone (multi- speed record holder in mountain biking on snow and on dirt roads ) who crossed it by mountain bike.
* In 2004: to enlarge the route, the Nepali bridge was added. Its relatively relaxed cables make the crossing very physical and full of thrill sensations. It is followed by the Great Wall, magnificent ascent in a yellow limestone.
* In 2008: 3 ziplines were built in October and allow an almost direct return to the parking lot.

Since 1492, on the orders of King Charles VIII, Antoine de Ville and the "Escalleurs du Roy" were entrusted with the ascent of the impressive Mont-Aiguille (Isère), which they will carry out with help of an impressive amount of reinforcements, ropes and ladders. In 1843, other mountain routes have been secured in Austria and improvements were made to the Dolomites. During the first World war , these developments for tourist purposes ceased. The military then equipped the mountains with ladders and cables to facilitate their progression. 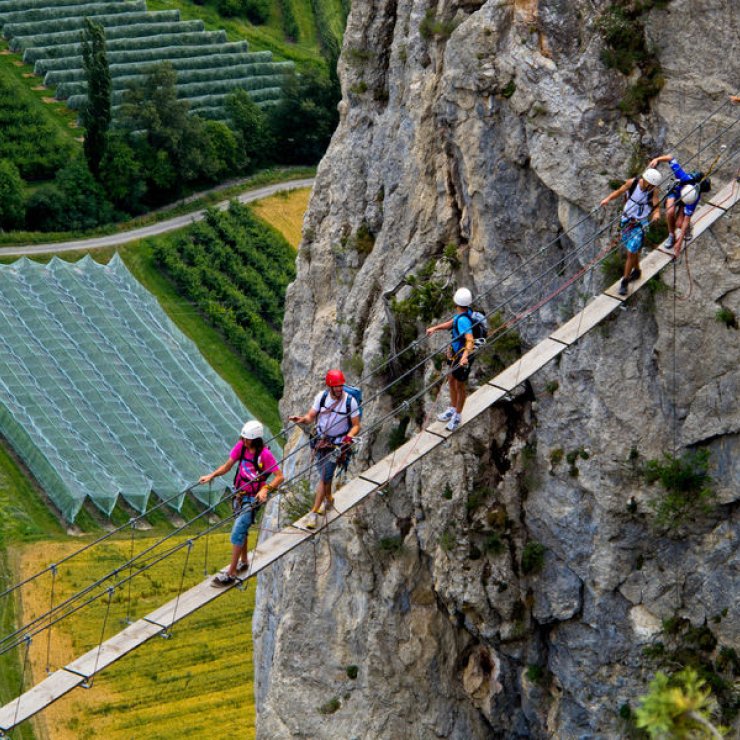 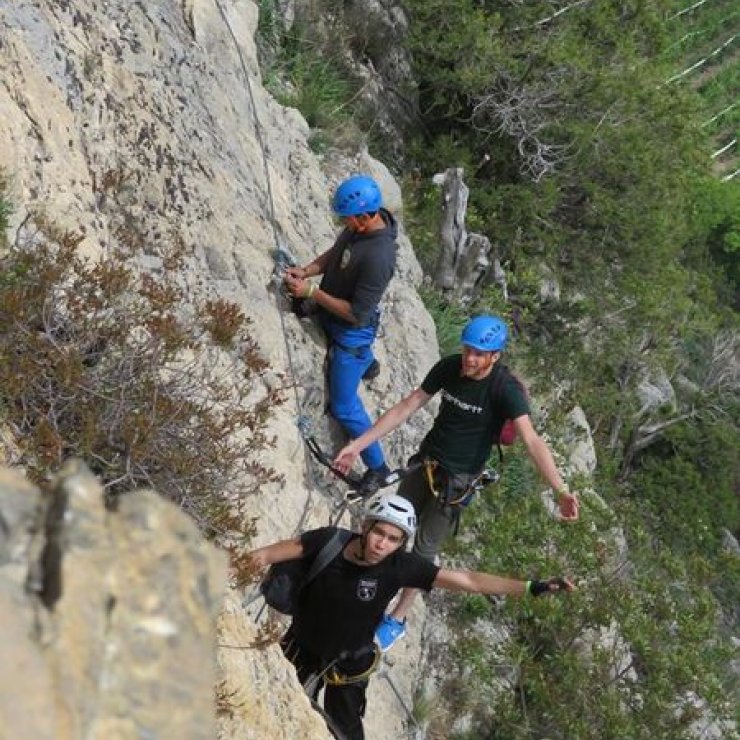 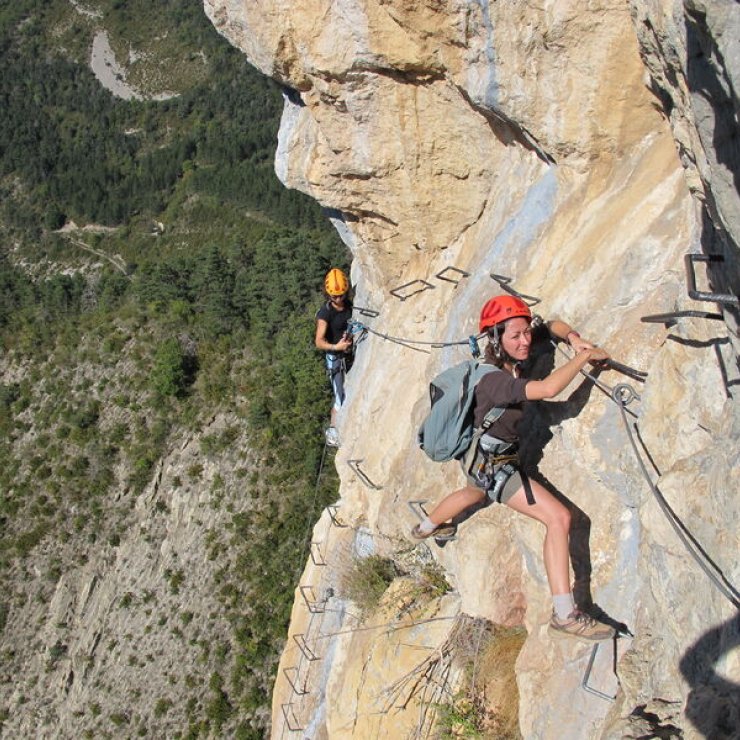 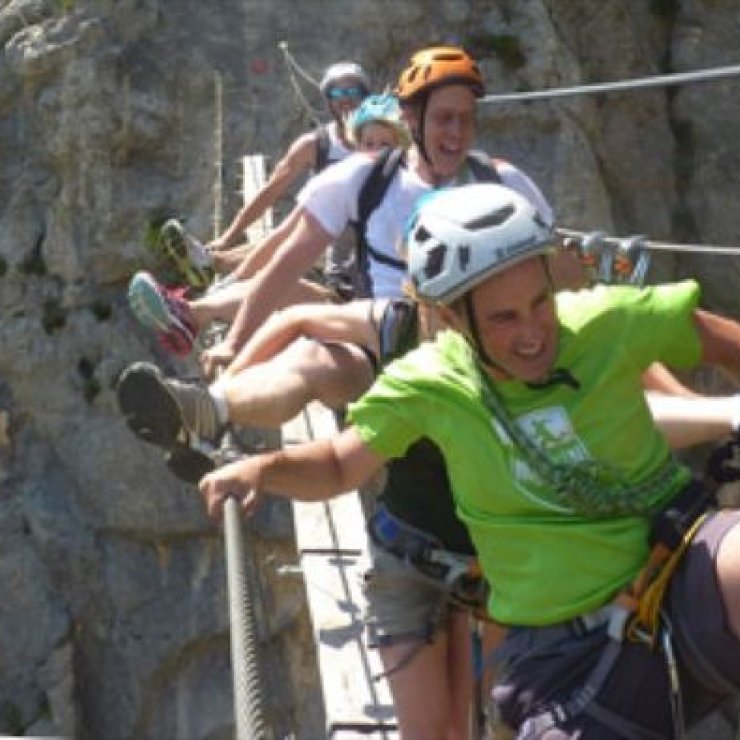